Stories of a Yogi: teach and travel in paradise

This summer is about Yoga and Travel. And in our Stories of a Yogi we will feature traveling yoga teachers sharing their experiences and stories.

This first story is about a dutch couple that lives their dream of traveling the world teaching yoga. Erwin tells us how everything began, how he and his wife came to Yoga and quit their jobs to become traveling yoga teachers.

One year after my first time on the mat I decided to become a yoga teacher at some point. While traveling through Laos I met a traveling yoga teacher. After the class I followed him, I spoke to him. He became the inspiration for the life I am living right now. In the meantime 5 years, 400 hours of study and 700+ hours of teaching have passed.

My wife, who is a yoga teacher as well, and I decided to give up everything in the Netherlands. We took off to spread our love for yoga around the world.

Being on the road for 5 months now we found out that happiness is not something you can force yourself into. I did give up everything before. Ten years ago I left an apartment with a girlfriend in it and a well paid job in exchange for an uncertain life on a South American Road. It was then when I found out that living a traveling life can be as hard and sometimes harder than being in your safe environment at home.

Now, ten years older and wiser I had to find this out again. When you give up your securities in life like a well paid job, a home, friends and family you can rely on, you’ll find yourself vulnerable and insecure.

It seemed to be the perfect job 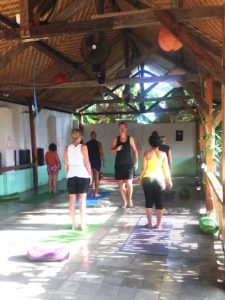 Our first gig as fresh international yoga teachers seemed to be the perfect job. Picture this: A yoga studio with a vegetarian garden cafe on a tropical Indonesian Island. Free meals and drinks three times a day and a pay check every month. The paycheck was not much but life in Indonesia is much cheaper than in Europe. So we calculated that we could save some money each month. The only thing we had to do is teach two classes a day and help the manager out whenever it was necessary.

When we arrived, we considered the beautiful garden cafe and the yoga shala a really nice place. But after the first day, my wife who is very sensitive to energies, told me it didn’t feel right. I had the same feeling but I thought it was because of the jet lag and the fact that we’re over sensitive after our latest teacher training we did before traveling to Indonesia.

After two weeks of struggling the manager wanted to speak to us. She had new instructions from the owners. From now on we had to pay for our meals and drinks with a 50% discount and the salary was depending on the yoga income. Teaching sometimes for just one student meant a decrease of our income and an increase of our expenses. Later we found out that the owners had no relation to yoga and were constantly disagreeing with each other. Some of them didn’t even speak to each other anymore. They just built the place because they thought, it was lucrative to invest in a yoga business.

The sensitivity we felt in the beginning was absolutely a sign. The energy of the place wasn’t very yogic. After six weeks with just 3 days off in between we left with a loss of 350€. But we learnt a lot. We learnt that even in the yoga world there are people who want to make money over the backs of the people they need the most, the yoga teachers.

Did we find paradise?

Oh yes we did! We found out that paradise is something that you create by yourself. It doesn’t matter where you are. Paradise is living from the heart. With our hearts we could make the decision to leave the Netherlands but with those same hearts we could make the same decision to leave the tropical island because we felt used and under appreciated.

Only doing what we like and working with people that are inspiring and open to be inspired by us without thinking about making money. This means that sometimes one of us is very anxious that we will end up bankrupt but when that happens the other is always there to promise that we will be awarded with an abundance of great experiences and love. And love is actually the only thing we need to live in abundance. 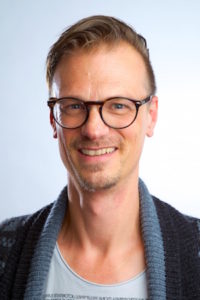 Erwin and his wife are now in Malaysia teaching yoga. After that?  Only the universe knows what’s next.( I think I just saw some pictures from Sri Lanka on their Facebook)
More about their yoga adventure you can read on their dutch blog: freeasayogi.com.
Or following them on their social media channels.

Wanna do it like Erwin and his wife? Wanna become a traveling yoga teacher?
Get the FREE online course “How to travel and teach” and discount on your membership for yogatraveljobs.com.
Write an email to joanna@yoga-can-do.com subject “Free Guide”.

Yoga in Bali: Summer Special with Yoga Can Do

First week in Bali – I didn’t get the feeling yet…

Transform your life with Yoga

I am Joanna, free soul and global yogi. On yoga-can-do.com I want to inspire you to a holistic yogic lifestyle, easy and grounded, honest and real, authentic and free. And as Yoga is about let it go and flow, I say goodbye to old dogma and strict rules and hello to the very personal pathway of yoga. Because the truth is within yourself - listen to it every day!

WHY YOGA CAN DO

To spread YOGA AS A WHOLE.
To clear up misunderstandings about Yoga.
To help YOU to experience its full potential.
EXPERIENCE EVERYTHING YOGA CAN DO
In your life, your relations, your everyday.
Experience with me the power of yoga.
Experience transformation and healing through Yoga.
LOVE HEAL CONNECT

This website uses cookies to improve your experience. We'll assume you're ok with this, but you can opt-out if you wish. Accept Read More